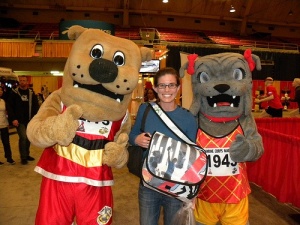 At the race expo with mascots Miles and Molly after I won a supersize goodie bag!

I’m a big time running nerd so I get really excited about race expos. The Marine Corps Marathon (MCM) expo was held at the D.C. Armory, and opened the Thursday before the race. I put in a few extra hours at the beginning of the week and got a sub for my Thursday boot camp so I could be there right at 3:30 for the opening ceremonies. This was partly because I’d seen on their Facebook page that they’d be giving away 36 supersize goodie bags, and you had a good chance of winning if you showed up early on day one. I was determined to win one!

Unfortunately there were already a hundred or so people in line when I arrived so I was not among the first 20 who got to play a game for the first two goodie bags. I was a bit bummed, but still really excited to be at the expo. The marines are nothing if not organized so picking up my bib and my shirt was a pretty easy process. I spent awhile in the Brooks booth browsing the official gear and settled on a white, long sleeve, half-zip running shirt and a pint glass (clearly hoping to do a little post-race celebrating).

I weaved my way through the rest of the expo stopping at just about every booth (like I said, I’m a nerd). Pacers showed me some really cool Mizuno gloves that actually warm up with liquid contact, i.e. rain, snow, sweat, etc. I might be buying a pair of those before the winter ends. I tried on a pair of Yurbuds, which fit my ears really well as opposed to most of my ear buds that just pop out every few minutes as I run. They also let in outside noise so you can stay aware of your surroundings. I picked up flyers for other races and chatted with the Team in Training group too. I did my first marathon with them while raising $4,000 for the Leukemia & Lymphoma Society and had an absolute blast. I hope to do another race with them sometime soon.

I finally decided it was time to go, but gave one last check of the MCM Facebook and twitter feeds, and saw they’d just tweeted that the first two people to find their mascot, Miles, and whisper Oorah would win the supersize goodie bags. Well, I was off and running and eventually spotted Miles to become the first winner. I was so pumped and the goodies were awesome! The bag itself was made out of recycled race banners from previous MCM’s, and was filled with a certificate for new Brooks running sneaks, sunglasses, numerous gift cards and more! It was a very cool way to integrate social media into their race, which they did a very impressive job of leading up to and even during their race. Stay tuned for a race day recap!

Some of the cool schwag I got as part of my supersize goodie bag!