2012 was a great year of racing for me until I was slowed over the summer by an injury, but after a couple months of physical therapy and steadily getting better I figured what better way to end the year than with a race. Pacers put on the New Year’s Eve Fairfax Four Miler complete with great swag – I love my sweatshirt!

Driving out to Fairfax during rush hour for the 6 p.m. start time has never been easier. Apparently lots of people in this area still hadn’t gone back to work or got sent home early! I’ve just started running again over the past few weeks and was given the green light by my physical therapist for this race as long as I just ran and didn’t actually try and race. I’m still going a bit slower than I would like, but am working hard on getting back to full strength, fixing my form and gradually building my speed back up again.

I lined up at the uphill start line a bit further back than normal so I wouldn’t be tempted to sprint out at the start, and took it nice and easy out of the gate enjoying the festive atmosphere at this race. The course looped through Fairfax rather than an out and back, which was a nice change of pace from most shorter races I’ve done. Everyone seemed to really enjoy the race and have a good time.

I didn’t look at my watch at all during the race because I was worried it would make me want to speed up, but  checked my mile splits after and for the most part kept to my plan of a fun race with an easy pace. I finished mile one in 9:13. I did a lot of weaving through mile two and felt like I was going a bit faster than I should running it in 7:51, but evened myself out for the second half running miles three and four in 8:33 and 8:16. 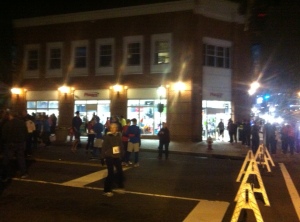 Outside Pacers by the Start/Finish 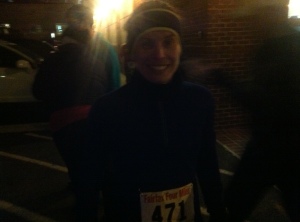 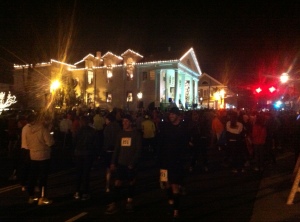 1 thought on “Back in Action: Fairfax Four Miler Recap”