Last week Pacers hosted a Q&A session with professional runner Ed Moran at their Clarendon store. He gave some great training tips and running advice in a conversational format allowing all of us that showed up to ask any questions we had and dictate where the conversation went. It was a really enjoyable, info-filled event. 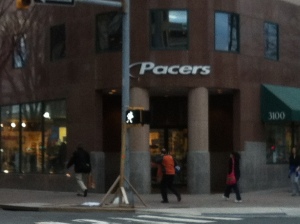 Ed was a four-time All-American at William & Mary College and a seven-time U.S. National team member. He won a gold medal in the 5000m at the Pan-American Games and ran a 2:11 in his debut marathon. It was really cool to get running advice from someone who has raced at this level.

Having dealt with many injuries over his career he talked about the importance of cross-training in our training plans and discussed ways to incorporate speed training among many other topics. One of the pieces of advice he gave that I found most interesting was on fueling during races and how to practice. He suggested looking at the water/aid stops on the course map and only allowing yourself to drink at those same points on your training runs. I think this makes so much sense and will try to put it into practice when I train for the Marine Corps Marathon this year.

Check out the Pacers calendar for more upcoming events like these and fun runs.