My friend Lindsay and I headed out to Potomac River Running’s Tyson’s store Thursday night for a special Nike Just for Her VIP Night. We’re both planning on running the Nike Women’s Half in D.C. next month so we figured this would be a fun, pre-race get together. I had really good intentions of cranking this post out Thursday night so it’d be up Friday morning, but I was too nervous watching the Syracuse game that night and too fired up after they beat one-seed Indiana to be able to focus on writing! 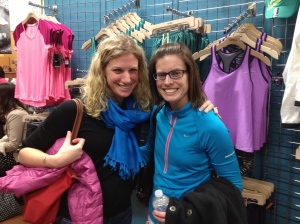 Lindsay & Me at the Nike Event

I’ve been to similar events before, but this one was by far the best yet – they did a really good job. The first 30 RSVPs to show up received free Nike swag bags, but despite being there fairly early we didn’t stand a chance since apparently some people showed up hours early. We filled out some surveys to give Nike some feedback for a chance to pick a plastic easter egg that might reveal we won a prize. No luck there either, but we quickly turned our attention to the table where ladies were mingling about and enjoying wine, nuun cocktails and snacks. I wasn’t in the mood to drink anything so I just grabbed a water, but I did load up on some snacks! 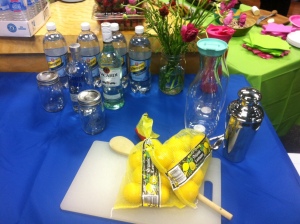 We had a bit of time to wander around the store and check out all the great gear. You could even sign up for free massages! I drooled over the Nike wall of gear for awhile before deciding on a few things.

The Nike reps gave a quick presentation on Nike+ before letting people go back to milling about the store. They called everyone to attention a few more times throughout the night to showcase some new Nike gear (good stuff!) and also did a bunch of raffles every 15-25 minutes. Before switching to my Garmin I used Nike+ for a few years back when it was an iPod attachment and then a wristband and shoe pod. I really like the improvements they’ve made to their free app and think their updated Nike+ GPS watch with Tom Tom is pretty awesome. I was really hoping to come away with one in the big raffle at the end of the night, but unfortunately did not win out. Don’t tell my Garmin I said that, because it’s already been finicky lately and I don’t need it getting jealous and breaking down on me. 😉 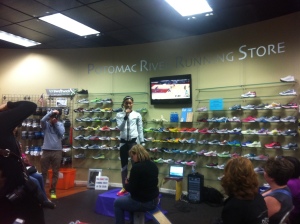 To enter the raffles you had to buy something Nike from the store. I wish they’d let everyone get at least one ticket for free and then gave more entries to people who purchased items, but that was really my only complaint of the night. I managed to find a few things I really wanted anyways and since I just passed the $50 mark, I got a free pair of Nike performance socks to go along with them! I picked up a great new Nike running hat. Let’s just say it was time – my white running hat I’ve been wearing since training started for my 2011 Twin Cities and Marine Corps Marathon races is getting a bit worn. I also got a new orange top that is identical to ones I already have in green and white. They are oh so comfortable and I love wearing them on the run or to the gym or spin class. I figured I’d go with Orange in honor of Syracuse taking on Indiana in the Sweet 16 later that night! 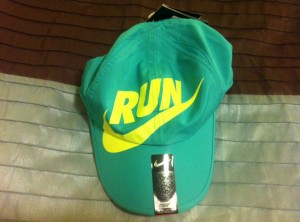 I’m so glad we made it out for this event. It was a lot of fun and I’m getting even more pumped for the Nike race now. I can’t believe it’s just a month away!