My first two FitBloggin recaps were all about the event, so my last recap is more about the fun, touristy stuff Ian and I did while in Portland. Neither of us had ever been so we were looking forward to the trip. I really enjoyed the city although we unfortunately brought the D.C. heat and humidity with us as the temps never dropped below 95 while we were there, so that made walking around the city a bit uncomfortable. My runs around the city as I mentioned were all beautiful – the numerous bridges were very cool.

The only thing that surprised me negatively about the city was the sheer amount of panhandlers and how young so many of them looked. Ian took a short, 8-block walk while I was at a session and was asked for a dollar by 25 people. It felt worse than walking around New York City even in the touristy sections. It really caught me off guard.

Back to the positives… I loved the restaurants. One of my favorites was a haunted pizza place we went to twice called Old Town Pizzeria and Brewery. We enjoyed some great pizza and beers. Check out the full recap over on Ian’s blog.

We also hit up a semi-permanent food truck village where I enjoyed a pretty amazing grilled cheese sandwich and a coke! There was so much variety though, you could choose any kind of food you wanted.

Yet another great spot we went to was a bit more upscale – an Italian restaurant called Mama Mia. I ordered gnocci and left there so full I could barely walk home. It was that kind of food that’s so delicious you just can’t stop eating even though your stomach is ready to burst. 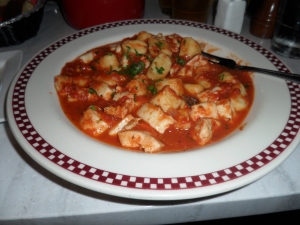 I also loved Brunch Box – another spot we hit up twice – yea we ate a lot! It was a relatively new restaurant that got its start as a food truck. One of the dishes they’re quickly becoming famous for is a burger with two grilled cheese sandwiches as the bun. With all the other food I’d eaten that weekend I couldn’t quite bring myself to try that, but I had a great bagel sandwich for breakfast on our first trip and an amazing buffalo chicken sandwich the next day for lunch! 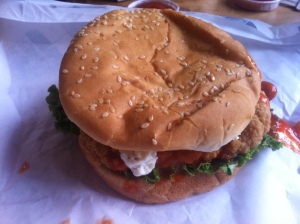 As I keep writing this I’m starting to realize just how much I ate while I was there!! Good thing I was doing three workouts a day! To keep the food theme rolling, everyone said we had to stop at VooDoo Doughnuts while we were there. Apparently everyone else heard the same thing as we trekked over there four times before finally catching it with a short enough line to be worth waiting in the close to 100-degree heat for. They have some awesome doughnuts to choose from and I went with the “Old Dirty Bastard” – yeast doughnut, chocolate frosting, Oreos and peanut butter…so worth all the effort! 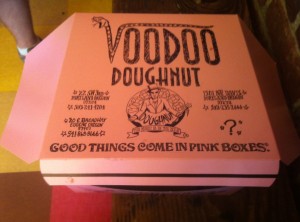 Just in case you’re wondering we did a few other things than just eat while we were there! We tried to go to the Oregon History Museum, but it was a bit pricey and only open for another 45 minutes, so we sat in the lobby for a bit pretending to decide whether or not to buy a ticket while we soaked in the AC before venturing back into the heat wave. We also wandered around the Nike store next door to our hotel and took advantage of Portland’s lack of sales tax! We walked around the famous Powell’s bookstore – the largest used and new bookstore in the world. It was a nice bookstore, but again we were really just more thankful for some AC and a break from the heat.

It was a great few days and I’d be happy to visit Portland again some day!