On Saturday I ran the Navy Air Force half marathon in D.C. and the conditions could not have been more perfect. After temps in the 90s mid-week, a cold front came through giving us all a reprieve and a starting line temperature in the mid-50s. I went into the race fairly optimistic about my chances as I’ve been training hard and running much longer distances on my Saturday long runs than the 13.1 I’d have to run on race day. 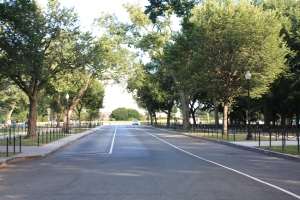 Before I get to the race, I’ll start with the expo. Packet pick-up was available Thursday and Friday, and I was a bit worried I’d run into long lines and crowds going after work on Friday near the end of the expo, but that ended up not being the case at all. Other than waiting in 5-10 minutes of traffic to get into the Joint Base Anacostia-Bolling, it was a breeze. I had my bib in no time, wandered around the expo floor for a few minutes and grabbed my shirt on the way out. It was very well organized and a decent expo for a smaller race. 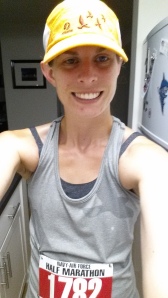 Saturday morning I was up at 5, and Ian and I were in the car by 6. It’s amazing how easy it is to drive into D.C. at 6 a.m. on a weekend morning – we were parked in the Reagan Building parking garage by 6:15 and walking to the start line. Thanks to all the water I drank in the past few days and probably my nerves I ended up making a few bathroom trips then got in a full warm-up before heading toward the starting chute. I handed my jacket off to Ian as I made my way to the line and he headed toward the first mile marker to snap some pictures and cheer me on when I came running by. 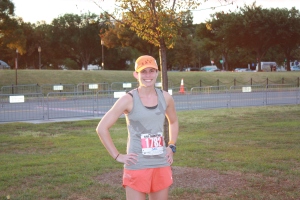 A great rendition of the National Anthem led to the 7:15 start for the Wounded Warriors and other wheel chair athletes. So inspiring, and holy, they are fast! 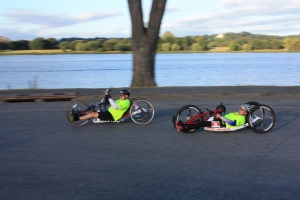 At 7:25 it was time for the rest of us to go. The start and the course were very familiar to the Cherry Blossom 10 Miler except that there were a lot less people so you could actually stand comfortably at the start line. That also mean less crowd support, but those that were out there were very encouraging. I was able to start fairly close to the front so I didn’t have to do any weaving during the early miles. I really love this course and have run and raced on it so much now I feel like I could do it with my eyes closed – except then I’d miss the great scenery and D.C. monuments! 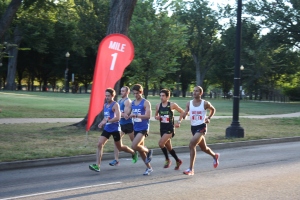 Last week I mentioned I was thinking about running without my watch and got a lot of great feedback, so I was all set to give it a go, but ended up wearing a regular stop watch (no garmin) at the strong suggestion of my coach. I kind of regret doing this and wish I’d just gone no watch at all or garmin. I was still very aware of my pace by looking at the watch keeping me from going just by feel and it really just meant I had to do more math in my head along the way. Oh well, lesson learned and I’m sure there’ll be another opportunity to truly go watchless.

My coach gave me a goal time of 1:41:36 or a 7:45 pace, which I thought would be very doable. I did my best to not go out too hard and hit mile one along Independence Avenue just 10 seconds ahead of pace. I waved to Ian and kept on going toward mile 2 feeling very comfortable and trying to slow down just a touch to get myself at that 7:45 pace. Well, unless I easily ran the fastest mile of my life mile marker two on the Memorial Bridge was very incorrect as I hit in in 12:35, haha. After that I didn’t take much stock in the mile makers although they could have all been correct the rest of the way for all I know – it just didn’t inspire a lot of confidence in them. 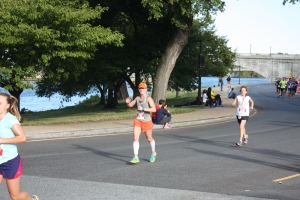 I loved the stretch up toward Rock Creek from miles 3-5 although the slight uphill slowed me a bit, but I hoped to regain it on the downhill back towards Hains Point. At mile 7, I was still averaging about an 8-minute mile, so I’m not really sure how I slowed as much as I did. It was definitely between miles 7-11 though as my breathing felt fine, but my legs felt a bit sluggish. It was nothing like the Nike half though where I let myself get so tied up in my goal time that I was absolutely miserable. I was still having fun out there and really enjoying the run on such a perfect D.C. morning.

Mile 8 was the last time I looked at my watch until I stopped it at the finish. I saw Ian again about 8.5 in just before getting to Hains Point. It’s always great to have support along the course and brought a huge smile to my face. I know everyone hates running Hains Point, but I was actually looking forward to this mostly flat, final stretch of the race, especially since it wasn’t super windy there for once. 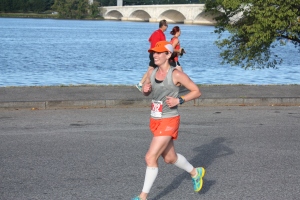 I got a second wind around mile 11 and started moving quicker again and passing a lot of other runners. Ian who is getting pretty good at navigating a race course was waiting for me at the 13-mile mark before my final push to the finish. I crossed the line and gratefully accepted a water bottle and my finisher’s coin before making my way out of the chute and stretching a bit before heading back to the car.

I was almost surprised to see 1:50:11 as my final time, which put me in 584th place out of nearly 2,500 runners. I didn’t feel at all miserable like I did during the Nike Half, yet this time was even slower. I wasn’t unhappy and I really enjoyed the race and had fun running it, but my time does concern me a bit. The 8:25 pace is slower than I ran my last marathon and definitely slower than what I need to run Marine Corps in to get my Boston Qualifier. 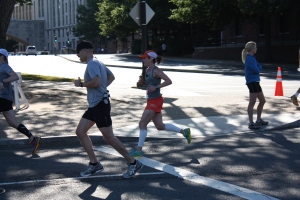 Still, I have six weeks left of training and learned some valuable lessons and key takeaways from this race that I’ll detail more in a later post, so I’m counting this as a positive experience. While a PR would have been awesome, it just wasn’t in the cards on Saturday. With the goal race of my season still a month and a half away though, that’s okay.  Time to move forward and keep working! 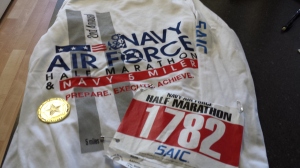 How did your weekend runs and races go?

Congrats to one of my favorite run bloggers, Maureen of Running on Cabernet, for absolutely crushing her sub 2:10 goal at RNR Philly!!