Things are getting real! I made it over to the D.C. Armory for the Marine Corps Marathon Expo last night. Other than a few wrong turns on the way to the expo that made it a much longer trip than it should have been, things went very smoothly.

The Marines have this one down to a science, so I was in and out of the tent to pick up my bib in just a few minutes. After going through another round of security (first one was to get into the tent to grab my bib) I made my way into the armory and it was time to explore!

I made Ian take some silly pictures of me when we first walked in. 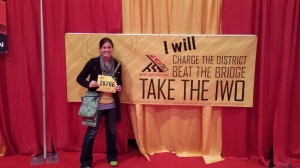 I cannot wait till I have The Iwo in my sights on Sunday and am getting my picture snapped in front of it with my finisher’s medal. Does anyone know how I could just fast forward to that part of things?!?

After that I picked up my shirt and for the first time of my three MCM’s I will actually wear this one and not just keep it as a souvenir. Don’t get me wrong, the bright red and mustard yellow cotton unisex mock turtle necks in the bin under my bed do hold a special place in my heart…they just don’t get worn very often (read ever). This year they unveiled newer technical long sleeve shirts that look a whole lot better and might actually get me to “rock the mock” as they like to say! Kudos to MCM on making this change!

After grabbing my shirt, there were a handful of free samples you could grab before heading into the Brooks official merchandise area.

The lines were really long so I didn’t end up getting anything, but I may try to find my way back there before it closes. My only complaint about the gear was the sheer amount of pink women’s MCM gear. I like pink as much as the next girl, but it doesn’t seem to fit with this race in my mind, and I also get frustrated when people think all you have to do to sell gear to women is slap some pink on it. Regardless there was still a lot of good stuff!

I also wanted to get a new pint glass for this year to go with the one I have from 2011, but didn’t see any. I very easily could have just missed them though. If you were there and saw them, let me know!

I wish I had more time to explore the booths, but we were there pretty close to closing time and hadn’t eaten dinner yet, so I moved through pretty quickly checking out all the different running gear and goodies. I did stop by the Clif Bar booth to pick up my 3:35 pace band!

All in all, it was a pretty great expo and I left feeling motivated and excited for race day!

Are you racing MCM? How was your expo experience? Are you a fan of large race expos?