We started off our honeymoon in Ireland. In this post I’ll talk about our first and third days, which we spent in Dublin. Part two, coming next week, will highlight our day trip to Ireland’s west coast.

Ian likes to say I vacation hard and notes that he often needs a week to recover from my vacations. He’s probably right, but I can’t help it. When I get to new cities I love playing tourist and want to see anything and everything that I can cram in. I’m also a big fan of walking everywhere we go, so you can really get to know a city. After averaging seven to 10 miles a day though for the first few days I gave in and discovered the wonders of public transportation when we got to Rome. More on that later though.

After a few hour delay in Chicago’s O’Hare Airport, we were on our way to Dublin. This threw off my day one itinerary as we got in too late for the historic walking tour I had planned on attending, but we were able to fit that in on day three. We knew we had to power through the day, but ended up succumbing to the jet lag and napped for a bit before getting started. The first day after flying across the Atlantic is always brutal, even if you do sleep on the plane!

We stayed at the Fleet Street Hotel right in the heart of Dublin’s Temple Bar district. It wasn’t the nicest hotel, but the price was right for the location. Even booking one of the biggest rooms, we had just enough room in there for a double and a twin bed (either that or 3 twins were the only choices here) and not much walking space! It was clean and close to everything though, so I would recommend it to anyone wanting to stay right in the thick of it on a budget. Bars are open late and all around the hotel and neighboring streets, so not a great place for a family trip.

The hotel advertises it’s affiliation with Sullivan’s Irish Pub, which is partially true as it is directly underneath the hotel on the backside. The front entrance shares an entryway with TGI Friday’s though, which left us chuckling. We did not fit in a stop there!

We quickly found our way right into an Irish Pub called O’Connells for beers and lunch. With our energy restored, we set off on foot for the Old Jameson Distillery.  We managed to avoid the rain during our lunch break and enjoyed pretty decent weather throughout our time in Ireland – especially for this time of year. It was mostly sunny and hovered around the mid 50s, although when the winds picked up it felt a lot cooler at points.

I read this sign wrong at first and was a little disappointed!

While we waited for our tour to start, I learned how much I like Jameson in hot chocolate and that Jameson and Ginger tastes great – how have I never drank that?! The tour walked us through the history of Jameson and the process to make it. We were also given a heads up that we should jump at the chance to volunteer if asked and that certainly paid off.

Ian and I both got picked for the taste testing after the tour. We started with Jameson, followed by Johnny Walker Black and Jack Daniels. After giving the correct answer that of course the Jameson tasted best, we were awarded with official whiskey taste tester certificates!

We then proceeded to close down the Jameson bar with more rounds of Jameson and Ginger until realizing we were the only ones left in the place and they were picking up around us!

On our hike back to the hotel we stopped at another pub (really, they are EVERYWHERE!) called Thomas Read for drinks.

Before calling it a night we had dinner and drinks at a pub near the hotel. The menus are pretty similar from bar to bar so if you enjoy pub food and a few pints you really can’t go wrong!

Day three of our trip was another day of exploring Dublin. We finally got to take that historical walking tour of Dublin, which started at Trinity College just around the block from our hotel. We also saw other points of interest including the Dublin Castle and learned a lot about Irish history. Our tour guide was entertaining and full of interesting stories. 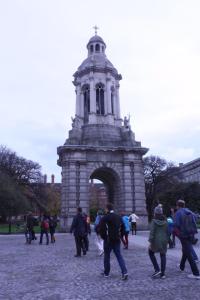 He showed us to an expensive restaurant called The Bank after our tour was over. We didn’t end up going in, but it sounded very cool and we’ll have to check it out if we ever make it back. It was an old bank that was converted into a restaurant but the interior was never really changed. He told us the bathrooms were in the vaults, calling them the safest bathrooms in Ireland!

Exhausted and hungry after a two-hour walking tour turned into three, we stopped for lunch at the Vat House pub. More good pub food and more beers/ciders. I generally ordered a Bullmer’s Irish Cider while Ian’s most frequent drink of choice was Smithwicks. He also enjoyed the Guinness Dublin Porter.

From there we set off on another hike to find the Guinness Factory. I may have led us a bit astray and taken the long way, but we managed to find the entrance before it was too late. This was my second time doing the tour, but they’ve made a bunch of updates since my trip five years ago so there were plenty of new things to see. In addition to the history and the how it’s made, one of my favorite parts of the tour were the advertisements over the years. You could view both print and TV ads dating back to the 20s. I couldn’t help but laugh at the early ones touting the positive effects of Guinness on your health!

After the tour we each enjoyed a Guinness at the circular bar atop the building. The windows are all glass giving you an unparalleled panoramic view of Dublin. It was a bit crowded up there so we didn’t stay too long but we did enjoy taking in the views and sipping on Guinness.

Later that night we headed down the street from our hotel to Oliver St. John Gogarty’s Pub for an Irish Music pub crawl. Our tour group never showed, but we enjoyed some beers and Irish music on our own anyways. We hit up the Gourmet Burger Kitchen in Temple Bar for a late dinner. The food was just OK, and the service was really slow. I’d recommended sticking to pub food while there.

Dublin was a loud, fun city filled with pubs that keep the beers flowing. We had a great time there!