Winter running brings with it all sorts of obstacles. It seems like a lot of my runner friends would rather be too chilly than too hot on a run, but I’m the oddball who loves nothing more than getting out on the roads on those 100 degree hot and humid D.C. summer days. I’ve made a big effort over the last couple years to not listen to my inner cold weather wimp, and keep running outside as much as possible during the winter. I’ve already shared some posts on my favorite cold weather gear and getting out there even in sub-zero temps, and having spent the first two-plus decades of my life growing up in Syracuse I have to admit getting out on the roads down here in the winter is much easier than they have it up north.

Battling the cold or slippery snowy streets aren’t the only obstacles winter brings, however. There’s so much less daylight! I hate leaving work and having it already be dark out, and I can totally understand how people can suffer from seasonal affect disorder…it’s really depressing! Running in the dark brings out a whole bunch of safety issues. As a female runner, I try to never run in the dark alone. Obviously running in a group is safer for anyone who is running in the dark (or anytime for that matter), but I definitely think it’s something we women runners think about a lot more. 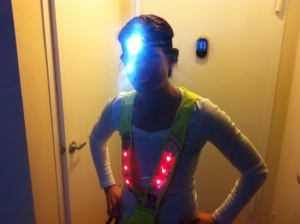 On occasion that I want to do an early morning run before daylight this time of year, I get myself up at an ungodly hour to meet up with a Pacers Fun Run Group for a 5 a.m. run. If you can’t tell, I’m not much of a morning person! The route is mostly well lit, but at that time of the morning, it’s dark for the whole run even in the summer. I also like to run or bike home from work a lot, which takes me along a well-populated mostly well lit route. There’s one stretch though without street lights where the trail runs facing a busy road, so you have to battle the headlights coming at you to still see the road you’re running on. I got a headlamp for Christmas that has completely solved this problem. It’s amazing how a little light can provide so much power and light up my line of sight. I have no problems spotting the paved trail, staying on my side of the yellow line and seeing any bumps in the road I need to avoid.

The headlamp helps me stick out too so other runners, bikers and drivers can easily see me. I don’t think runners always realize how hard it is for drivers to spot them once dusk hits, and knowing that you’re battling with so many other distractions (put your phones down in the car people!!) for their attention, I want to make sure I’m as visible as possible. In addition to the headlamp (which makes  me look oh, so cool!), I rock a Nathan reflective vest that has two built in bright red solid or blinking lights. Just to ensure I look as much like a Christmas tree as possible on my early morning or evening runs, I like to set it to the blinking setting. I also have a couple reflective snap bracelets that help as well. I might get made fun of for looking like such a dork, but I’ll take that over ending up as a newspaper headline for runner hit by car any day!

Stay safe out there and remember to keep it light!

2 thoughts on “Keeping It Light!”