Last week I said that nutrition was going to be my big focus for March and a major part of that would be making an effort to eat more fruits and veggies. So far I’m off to a pretty decent start. I’ve been drinking a banana-berry smoothie every day that’s super easy to make, especially in my magic bullet blender that doubles as the drinking glass!

I’ve made smoothies like this one before and the biggest things that have kept me from making them more regularly is the cost of fruit and the frustration when the fruit goes bad too quickly. Well I found a great solution to that  this week – frozen fruit! I’m sure it’s not as healthy as the fresh stuff, but it’s better than nothing and it’s also a lot cheaper. I bought a couple bags each of mixed berries and strawberries at Trader Joes and it’s been working out great. I really should venture out and try other kinds of smoothies, but being the picky eater that I am, I’m hesitant to try something new. Let me know if you have any good suggestions I should try. Here’s the recipe for mine:

I also usually eat a banana with breakfast and an apple as a midday snack, so the fruit is going pretty well. The veggies are a bit harder for me. I had corn a couple time this week, which is the one veggie I really like and of course not the healthiest, but still, it’s something, right? I also did something this week I don’t know if I’ve ever done before in my life. I had a salad at home with dinner. I’ll eat salads (or eat bits of them and then push it around on my plate to make it look like I ate more) when served at weddings or conferences or at other people’s homes for dinner, but I’ve never actually made one at home to go with dinner. Ian and I went the easy route to start things off and bought a bag of pre-mixed salad at Wegmans and some light Italian dressing. It wasn’t great, but I didn’t hate it either. It’s a work in progress.

On the not so healthy side, Ian and I put together a delicious creation this week: buffalo chicken deep dish pizza. I made a deep dish cornmeal pizza dough in my bread machine and spread it around and up the sides of a 9-inch round baking tin. Ian added a layer of cheese to the bottom, then we topped with the chicken and buffalo sauce and finally another smaller layer of mozzarella cheese plus a sprinkling of shredded parmesan. Simply amazing! 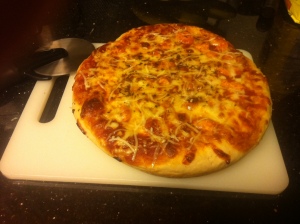