Ah, so I’m a day late with my usual recap. After a weekend out of town and pushing my long run till yesterday after work, there wasn’t much time for blogging! Last week felt good and strong. After a couple of tough weeks, it was just the confidence boost I needed going into taper time. Here’s the day-by-day breakdown:

Monday: I put in five easy miles along the Mt. Vernon Trail after work.

Tuesday: Despite the government shutdown and closing of National Parks, there were no barriers blocking the Mt. Vernon trail and plenty of other bikers and runners there, so I took my speed workout to the trail for the day. After a mile warm-up, I did eight half-mile repeats with 1-minute rests in between followed by a mile cool-down.

Wednesday: Another easy 5-miler along Mt. Vernon after work. I felt stiff and slow, but when looking at my watch at the end actually ran about 20 seconds per mile faster than Monday.

Saturday:  6.55 miles around Hoboken with the NYC skyline in the background!! I woke up a bit earlier than expected this morning so thought I might go long, but immediately realized that wasn’t going to happen. I’ve run in Hoboken a handful of times, but only really have one main route that I take. I was able to scoot through there once, but they were setting up for an obstacle course race, so multiple loops through there weren’t going to happen. Running the main streets was too frustrating for me with the constant stops, so I decided it would not be a very good long run to end on before taper mode and headed back towards my brother’s place after mile five. While the view is spectacular one things that drives me crazy about running in Hoboken is constantly having to be on the lookout for dog poop everywhere. After dodging it for the first 6.25 miles I managed to step in some in the last few blocks home. Pick that sh** up people!!

Sunday: Rest Day. After a super fun night out at my good friend’s wedding and a drive back to D.C., I just wasn’t feeling like running at all, so the long run was put off for one more day.

Yes, I know it’s Wednesday night. I had great intentions of getting this post up on Monday, especially since I haven’t posted anything in forever. I’m behind…on everything. I have a bunch of unanswered emails in my inbox, which is a huge pet peeve of mine and a to do list a mile long that has way too many things not crossed off. After my four trips in four weeks exhaustion started to catch up to me at the same time I was moving, starting a new job and new car shopping. Needless to say it’s been a busy but awesome couple of weeks, and unfortunately I’ve fallen behind on the blog. I’m hoping to turn that around and get going on things again though, so let me know if there are any posts you want to see this month!

Now on to the weekly recap! I missed posting this last Monday, but there wasn’t much to report. I only got 3 runs in for about 11 miles all on treadmills, but was sorer than ever from moving. I did not realize the new place didn’t have an elevator – thank goodness we’re only on the second floor! Last week was a lot better although this heat wave has not been helping my speed any! Still, I got some quality runs and strength training in.

Here’s the day by day breakdown…

Monday: I got in an easy one-hour run on the treadmill for a little more than 7 miles followed by a 20-minute strength training workout.

Wednesday: I ran home from the new office for the first time. It’s a bit further run commute than the old 3-mile one that I used to have to add loops to. This ended up being 9 hot and hilly miles with the last couple miles especially being a tough uphill route. Despite the heat I really love this run and look forward to doing it more – this will be a great one for my longer weekday run each week.

Saturday: Spin Class followed by a track workout. This was a bad idea and I instantly regretted sleeping in to late so that I couldn’t do the track first. It was great to be back at Revolve though – had been way too long. I walked from there to the track for 2X2 mile repeats with a 2 minute break that were supposed to each be 14:50. The first one I hit dead on, but then the spin class caught up to me and I locked up on lap 4 of the second set struggling to finish it in 15:23. Not surprisingly my Coach recommended that I don’t do my track workouts following another workout from now on after I sent in my recap. 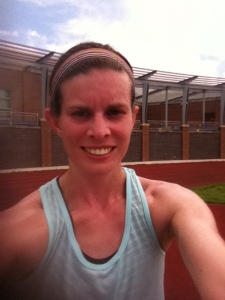 At the track realizing this was not such a great plan! Next time track first, then spin class!

Sunday: I split my long run into 2 runs today – the first about 55 minutes and the next just under an hour. I’m glad I made it outside for them both, but am looking forward to a true long run this week.