I realize I’m starting to sound like a broken record each month when I write these posts and talk about how quickly the year is going, but seriously September got here so quickly I almost forgot to do this month’s resolution check-in post! It’s so easy to let New Year’s resolutions slip after a couple weeks or a couple months, so I’m using these monthly posts to keep me on track.

Resolution number one was to get healthy, which I did early in the year and am happy to say that so far I’m staying that way and any aches and pains have been thwarted with some ice and quality foam rolling time.

Resolution number two was a stronger core, which not only would help me to stay injury free, but could also make me a stronger runner. I feel like I’ve slipped a bit on this and am not doing my core workouts nearly as much as I used to, so I’m going to make that my main focus for this month.

Resolution number three to drink less soda is still an up and down battle, but I’m working on it! 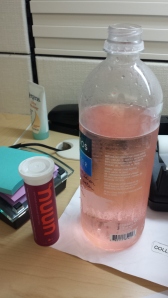 Resolution number four, which was more of a goal, was a Boston-qualifying time. With less than 50 days to Marine Corps Marathon, it’s almost time to put that to the test. I’m definitely putting in the miles, but as I mentioned in last month’s post, am still a bit worried about my speed. I’m hoping my tune-up races over the next few weeks will give me a good idea of where I stand on this.

Last month’s main focus was the long run and other than missing out during a recovery week when I was sick, I did an awesome job of putting in the long miles each week ranging from 17-19 milers!