On Tuesday, the coolest thing happened – I got to interview Bart Yasso, Runner’s World’s Chief Running Officer. I was so excited that I immediately called my fiancé, parents and brother to tell them about it. Call me a runnerd. I don’t care, I’m still too excited!

Bart Yasso has one of the coolest jobs on the planet and he knows it. It’s so refreshing to talk to someone who truly loves what he does and appreciates it. We talked training tips, Yasso 800s, race strategy and race experiences. I was so impressed by how genuinely nice he was and that he took the time to thoughtfully and thoroughly answer all of my questions. He had some great advice and some cool race experiences, and I’m so excited  to share them with all of you. 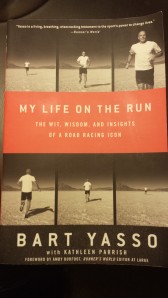 Training – Going for that BQ or ultimate PR
Bart outlined 3 key workouts for successful marathon training. “The cornerstone of everything is the long run,” he said. It’s all about proper pacing on your long run too as he sees many runners do them too quickly and leave their race out on their training runs. During the long run you should focus on building endurance and not worry about speed. He highly encourages runners he coaches to try to negative split their long runs – finish faster than they started.

For example, a runner doing a 20 miler with a marathon goal time of 3:30 should run the first 10 miles at roughly a 9:30 pace then start working up to a 9-minute pace and wrap up with 3-4 miles at or close to marathon goal pace.

The next key workout is a hill/speed session to work on increasing turnover and leg speed. He recommends hill repeats earlier in the program and speed workout later. For hill workouts, mixing it up can lead to more success than just powering up the same hill repeatedly. Try running 4 shorter hill repeats, 4 longer ones and 4 shorter ones again. This lets you work on faster turnover on the short hills and strength on the longer hills.

In between these key workouts you’ll have your easy recovery runs and cross training that make up the rest of your training. Another common thread among runners who have achieved marathon success is that they’ve been able to run injury free for a couple year period. It’s so important to listen to your body as most injuries he sees are basic overuse ones. (Been there.)

Yasso 800s
I had to ask Bart about this famous workout named after him as I have a bit of a love-hate relationship with it. He says he gets that a lot and hears from runners that they use his name in vain quite often! For those not familiar with this workout, you do 10X800 and the time you can run your repeats in should correlate to your marathon finish time – i.e. if you run your repeats in 3:20 each you should be able to run a 3 hour and 20 minute marathon.

Bart says he found this correlation decades ago looking at his training log, but maintains that he’s never said it works for anyone but himself and it certainly isn’t based on any kind of science. Amby Burfoot, however, thinks it works for everyone and wrote about in Runner’s World years ago making the workout famous.

Race Day Strategy
There’s no doubt that the latter portion of any distance race is more mental than physical, Bart says. During the early part of a race you need to be smart and run a proper pace then in the latter part of the race you need push yourself to run faster than you thought you could. While you should have a plan and think about what pace you can sustain, Bart says, don’t kill yourself with a set time – let the race play out and come to you.

His runners that have had the best success also run negative splits. When you’re running faster and passing people at everyone at the end of a race it’s the best feeling in the world and consequently when you feel like you’re on a death march getting passed by everyone it’s the worst feeling in the world, he says. Having been in both these positions in races, I couldn’t agree more.

Bart shared a great story about a 10k run, 50 mile bike, 10k run race he did years ago where he took the lead on the bike. The final 10k was an out and back and he ran as fast as he could swearing he could hear footsteps closing in on him. After the turnaround he realized he was a good 3-minutes ahead of everyone and went on to win the race. If he’d turned around he would’ve slowed down, but instead he “ran scared” and convinced himself to keep pushing faster than he thought he was capable resulting in a big win.

The Journey
Bart has been lucky enough to race all over the world on every continent. As someone who has “only” run 9 marathons and would have a tough time picking a favorite, I really put him on the spot by asking his top races. He said that it has changed over the years as his running changes and that’s what makes it fun. It’s all about the people and the experiences along the way.  He says the races he remembers the most are the ones he has connections with, so running the Rome Marathon where he was able to stop at several spots and chat with his Mom who came along on the trip holds a special place in his heart. He also calls running the Comrades Marathon an ultimate running experience. As a long-time fan of Nelson Mandela he said the race is what brought him to South Africa, but experiencing the country and history of it made it such a special journey.

Seriously, this man has such a cool life!

Runwell’s Perspire to Inspire Video Contest
Bart also chatted with me about Runwell’s Perspire to Inspire video contest in support National Recovery Month. Bart was very candid about his struggles in his youth with drugs and alcohol, which he talks more about in his book, My Life on the Run. “Running saved my life,” he said. He thinks he’s lucky to have found running so young and is willing to share his story in hopes that it can help people to not choose that lifestyle or show people who have fallen down that path that there is a way out.

The Runwell contest is very cool. You enter by submitting a short video describing how you’ve personally helped to inspire others to lead a healthy life. It’s a powerful message and I can’t wait to hear people’s stories. The winner who will be determined by the vote of an online community brings home a pretty cool prize too that includes a slew of things plus free race registration and airfare to a race of their choosing. Check it out and submit your story!

4 thoughts on “A Conversation with Bart Yasso”